1. Practice, Practice, Practice! Offer to read a packet during practice or on the way to a tournament. If you’re writing your own questions, read them aloud. If you’re reading old packets on your own, read the tossups out loud instead of reading silently. Reading questions aloud is essential to developing a cadence, increasing your clarity, and other aspects of speech that make a moderator good. You may even want to record yourself reading to get a sense of what players hear you’re moderating to them.

2. Know the rules. Most tournaments operate under one of three rulesets: NAQT rules, ACF/HSAPQ rules, or the rules of your local/state format. Knowing all three, and being able to apply them, is the hallmark of any good moderator. Do not, under any circumstances, allow yourself to be pushed around by a coach or player that claims to know the rules better than you do – if you and a coach disagree on the interpretation or application of a rule, and you’re not sure, check with the tournament director to make sure you’re right, but don’t just assume the coach is right.

3. Keep the game moving. In timed tournaments, very little conversation should be happening during the game itself. Short comments about a question are usually fine in untimed tournaments, but longer and/or off-topic digressions should likewise be relegated to halftime or before/after the game. Have some way of getting teams’ attention back to the game. In general, the best way to do this is to begin reading the next question, which will immediately quiet everyone in the room. Try to minimize delays when switching between tossups and bonuses. If you’re reading on a computer, open up two copies of the packet and switch between tossups and bonuses so you don’t need to constantly scroll the document. If you’re reading paper questions, split up the tossups and bonuses into separate stacks and use a pen to cross out the last question you read you can easily determine the next one to read. 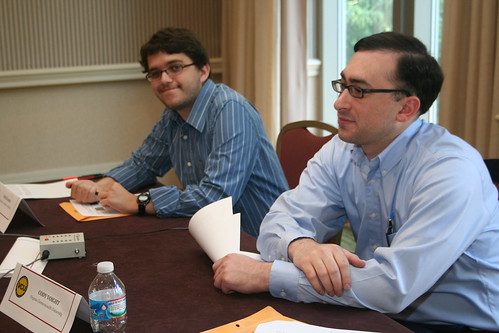 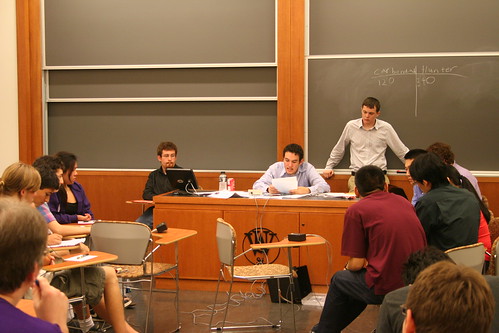 4. Learn pronunciations. Most current tournaments come with a number of foreign-language words and jargon terms that are incomprehensible to most people, and often have a nonexistent or incorrect pronunciation guide attached. Most good moderators have a basic understanding of how to pronounce words and names from Spanish, French, German, and Italian, at minimum. Forvo.com is a good place to hear pronunciations of foreign words you’re unfamiliar with. A quizbowl specific pronunciation guide can be found on the forums. Most scientific jargon consists of a bunch of relatively-easy-to-pronounce syllables all smashed together. Sounding out each syllable individually will usually do the trick; having a basic knowledge of Greek and Latin roots is even better. In general, an English pronunciation of a term will still be enough to get the message across to players, so don’t labor over getting the pronunciations exact. Most teams will prefer approximate pronunciations to frequent breaks in reading to prepare for upcoming tricky words and also would prefer that you do not spend time spelling out a word.

5. What’s on the paper is always right – initially. The proper ruling if a team gives an answer that is not listed on the paper is to disallow the answer and allow the team to protest that the answer should have been accepted. Do not accept an answer that isn’t on the paper unless you’ve seen enough answer lines to definitively know that the listed answer line is incomplete or wrong, and only then do it to keep teams from having to make protests that will obviously be ruled in their favor. By the same token, if a team protests that their answer should be accepted, and the other team agrees to concede the protest, don’t be dogmatically adherent to the answer line – one team is graciously agreeing to give the other team points, so you should let it happen.

6. Read at the fastest speed at which you are comfortable. No one likes a moderator that reads as fast as he can and causes teams to miss every third word, but by the same token, no one likes a moderator that takes two minutes to read a tossup. If you feel like you’re an unusually fast or slow moderator, warn teams of this before you start the match, and attempt to respond to teams’ requests to slow down or speed up. To get an idea of your speed, try timing yourself at home. On a standard high school packet, you should ideally be finishing a round under 30 minutes, but don’t sacrifice clarity to achieve this.

7. Be cordial to every team, and partial to none. One of your goals as a moderator should be for every team to be happy to have you a second time (either in a later round that tournament, or at a future tournament). But at the same time, you have a duty to do things the exact same way regardless of who is playing. If one team is complaining that they want a new moderator, it better be because you’re consistently applying the rules in a way that is disadvantaging them, not because you’re playing favorites. Do not give teams extra hints or other favorable treatment. Strive to be as impartial as possible.

8. Confirm everything with the tournament director or official in charge before reading the first round. The day before, make sure you know what time to show up and where the meeting room is. Plan for a day of moderating by bringing a water bottle and possibly some cough drops or other aides for a sore throat. Bring extra writing utensils to lend out to other staffers if they forgot to bring one. On the day of the tournament, make sure you know what room you are reading in, where the packets are, how and where to turn in scoresheets and pick up new packets, and how you will be getting updated instructions (e.g. how you will know what time to tell players to return from lunch). A good moderator always knows what needs to be done and finds the information he or she needs to act accordingly.

9. Focus the attention on the players. Treat your role as less of a game show host and more of a referee. Remember the adage that if a referee is the focus of attention, something has gone horribly wrong with the game. If the game has an audience, what they should take away is the performance of the players, not whatever antics you pull or controversies you create.