As teams play quiz bowl, they will invariably run into teams that are better than they are, and teams that they regularly lose to. How can a team improve and get better? This guide offers advice for teams at three different vantage points, since useful advice and good strategies change at different stages of improvement.

For new programs and novice players seeking to establish themselves 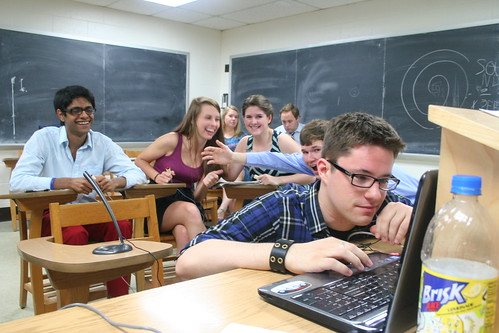 Fun in action. Photo by Colin McNamara.
Have fun! Enjoy playing and enjoy learning (if you’re a coach, let your players enjoy themselves too). Don’t be afraid if practices go off on short tangents if they help teach something new. Also, don’t be afraid if you or someone on your team draws some academic points from pop culture sources; many players start off with a lot of knowledge of this sort, and it’s nothing to be ashamed of. (There are many movies made from novels, and video games like the Total War series or Age of Mythology provide a baseline for many new history or religion/mythology players.) Players who enjoy their quiz bowl experience will be more likely to continue playing.
Whenever possible, conduct practices under game conditions. If you have access to buzzers for practice, set them up and use them. If not, consider applying for a buzzer grant from Matt’s Buzzers, or fundraising to buy a set. In the meantime, you can do slap bowl (slapping the table instead of buzzing). This gives new players experience with the format and prevents silly mistakes like buzzing in on bonuses or trying to confer during tossups. Try to approximate the rules, including timing. If there are enough players at practice, have scrimmages and keep score, keeping tracks of powers, negs, bonus conversion, and so on. This is not to say you have to do this at all practices—you could mix it up or be more casual at other times, but new players will benefit from regular practice under game conditions.

Focus on the basics. At first, quiz bowl questions may be intimidating. Because players hear harder clues first, they may think that the questions are hard, or they may despair that they don’t recognize many of the answers. And to some extent, that’s okay – quizbowl is a team game, and no new player is expected to get it all right away. But there are many game basics which are possible to get quickly, and new teams can focus on them to great effect.

Have an intramural tournament. To get even more game experience, consider having an intramural tournament within your school. If you have enough players, arrange them into teams (you might consider teams of 3 players if you don’t have enough for teams of 4) and arrange a small tournament. A round robin tournament—or even a single-elimination tournament—would be quick and would give teams some game experience. This is also a good way to train volunteers to get experience moderating, and might help bring in new players if people on the team bring in friends or classmates to fill spots.

Attend tournaments regularly. Practice is a good way to improve in quiz bowl, but going to a full day of competition regularly is even better. Attend tournaments as much as possible. If there aren’t many quiz bowl tournaments in your area, host one. Attending quiz bowl tournaments is also a great way to meet and get to know other players and coaches, and to learn from them. Competing against other teams gives less experienced teams a good idea of where questions are buzzed in on. If you can afford the time and expense, don’t be afraid to travel longer distances to attend a tournament (the drive to the tournament provides a great time to read questions or review material in the car), and try to attend national tournaments at the end of the year. Regularly attending tournaments also provides a good measuring stick of a team’s progress—even if they can’t or don’t buzz yet, players may start to recognize clues earlier, or realize that an answer that they might not have been familiar with earlier in the season is now familiar.

Get familiar with the territory of answers that come up over and over again. Players have different names for it – the “canon,” the “answer space,” the “recycled clues,” the “core works” – but this much is clear: there is a natural limit to the range of topics that intellectually-curious students are likely to come across at any level of quizbowl play. The seemingly-vast expanse of possible answers will always contain answers that will recur over and over again, from tournament to tournament (though the clues will differ somewhat each time as new questions get written). When this realization “clicks” and your team starts familiarizing itself with recurring material rather than grabbing at seemingly-random facts, that alone puts you past the national average. There are a few dozen key answers to learn in each category of the distribution which will come up at almost every tournament, and many more that will come up frequently (but not necessary every single time), and they correspond pretty closely to real-world importance. Good quizbowl players start to get a grasp on what they ought to learn most about for maximum returns.

Notes taken during 2013 BHSAT.
Keep a notebook. Each player should bring a notebook to practices and games. The players might not want to write everything down, but it provides a handy place to jot down notes and things to study. There are at least three types of things that might help players improve:
Study independently. Being exposed to questions in practice or at tournaments is good, but to improve even faster, study on your own. Reading questions on your own means that you’re not limited by a few hours of practice a week, or a tournament a month. There are lots of old tournaments available as archived packets on the internet, and databases that can generate randomized questions in selected categories. Reading daily questions means getting exposed to more of the canon even faster. And don’t forget to look up the things you write in your notebook.

Become a part of the online quiz bowl community. PACE sponsors the Quizbowl Resource Center forums at http://hsquizbowl.org/forums. It includes discussion sections for new teams, quiz bowl theory, tournament announcements, discussions about tournaments, and so on. Visit the site regularly to learn what the quiz bowl community is talking about and to keep up with current trends in your area and nationwide. Browsing discussions of previous tournaments can keep you up to speed on controversial tossups or well-trod clues that elite teams of previous years (who played those questions/clues in person) will certainly remember. There are other online communities on IRC, Facebook, etc. which also allow dedicated quizbowlers to meet and talk with one another (and perhaps read out some questions) in a more casual setting. Making new friends and getting connected, while good in its own right, can also help players find other people who are willing to trade tips about improving.

A lot of teams plateau at being good, solid teams, who do well or perhaps win tournaments regionally. Getting over that hump and into the national top-25 conversation takes even more work than just getting to the playoffs at local tournaments. 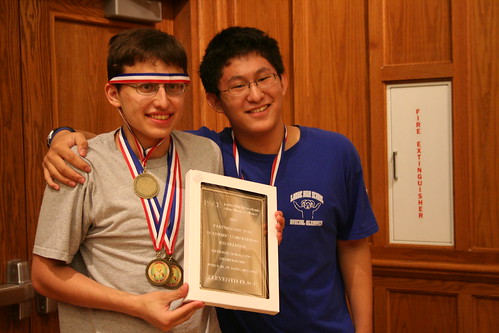 How does one accumulate those medals? Photo by Colin McNamara.
Commit yourself to specific goals. Measurable, concrete goals – “Get 23 points per bonus at the next tournament” or “We will win two tournaments this fall semester” – are better at motivating people than vague goals like “Do well.”

Write questions. Writing questions, at first, can be long and time-consuming. However, the effort of doing so as a study method more than pays off. People learn things much better actively (writing) than passively (listening). When hearing a question, a player will hear 5 or 6 clues, probably. When writing a question, a player will be exposed to at least twice that, and have to narrow down to sculpt the final question. Furthermore, the habit of writing questions can help you get “inside the mind”of how editors think while putting together the questions that you will play on, as you discover things about what sorts of clues are easy to understand on the fly or hard to phrase well. Teams that want to be elite should be able to write a whole packet.

Consider attending college tournaments. Many elite teams challenge themselves by attending college tournaments, which are all higher in difficulty than high school events, and allow for exposure to harder clues and rougher opponents. With familiarity with the expanded canon, questions that are hard on the high school tournament become more accessible. A strong high school team will be competitive at a novice college tournament like the ACF Fall or the Minnesota Undergraduate Tournament (MUT). A few championship-caliber teams have even competed in the finals matches of regular-difficulty college tournaments. A lot of these tournaments require that teams submit a packet, which forces teams to write questions. When preparing to attend college tournaments, be sure to practice with college-level questions. That said, blindly choosing to memorize whole collegiate packets may not pay off at lower difficulty levels; rather than wasting time on egregious material from upper-level college classes, select for material that high school national championships will still consider important. And forsaking the high school circuit altogether can be very dangerous if your team loses touch with basic high school-level material and other elite teams haven’t.

Read standalone books of academic importance instead of just packets. To put it quite simply, it’s easier to remember, get points on, and buzz on unfamiliar clues about King Lear if you’ve read King Lear rather than a plot summary of King Lear. There are many accessible, general-audience books on other subjects such as history or art out there too. Doing some manageable amount of real-world reading outside of class or practice can help a lot. Don’t go overboard reading things you don’t like or aren’t interested in – you can power many questions on people or things that you’d never check out of a library, though you’re less likely to do so than someone who has.

Know the enemy. The best teams aren’t just playing the game of quizbowl against their opponents, they also see the “metagame” of what other teams are good at and how they play. Start paying attention to what questions you’re always getting beaten to, and learn about the specialties and playing styles of other high-level teams, so you know what to expect from them and how to get past their weaknesses.

Develop strong specialties. Even the best players can’t do it all effortlessly; almost all championship-caliber teams have multiple contributing players. Even the most powerful solo players of all time have subjects that they’re better at even as they develop extremely competent generalist ability in others. Know what you can do and what you need to work on – then assign out categories so nothing is left uncovered.

Don’t rest on your laurels. Learn to power things that you can regularly get for 10 points later on; learn more about multiple functions of an organelle if you know a lot about the main one, etc. Until the mythical team emerges that can first-line every tossup in a single game, there’s more to push yourself towards.

Teach your children well. Work with younger players whenever you can to impart your knowledge for the future, which in turn helps you retain it. Ensuring that you can talk eloquently about a newly-acquired piece of information is a good test of whether your knowledge of it is concrete enough to serve you well in a game setting.

And…have fun! We’re back to where we began. Setting off on the road to national quizbowl fame can be very intense, and attempting to win a championship is an immense task, but always keep your love of the game in sight and remember, win or lose, the great experiences the quizbowl community has to offer.