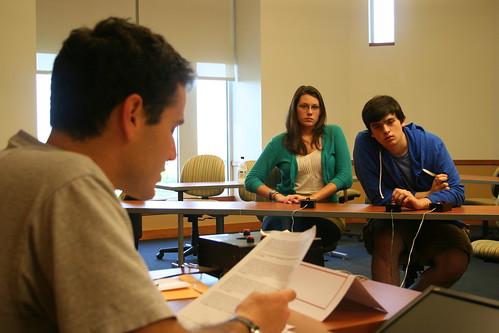 Photo by Colin McNamara from 2012 PACE NSC.
This is a summary of the most common rules of tossup/bonus quizbowl. There are many variants to these rules, some in use nationwide and others exclusive to local tournaments. Frequently used alternate rules are in different colors: red for NAQT, orange for PACE, and blue for other common variations on the rules.This summary of common rules are also available for download as a PDF file.

Each game is composed of twenty tossup questions and as many bonus questions are there are correctly-answered tossups. At NAQT’s national championship, there is a game clock. Each game is two 9-minute halves. The game ends when the clock runs out or when all 24 tossups in the packet have been read.

The team with the most points at the end of the game wins (see Overtime below).

Tossups are played on the buzzer. Each player has a separate signaling device and may buzz in during or at the end of the question to answer the question and attempt to earn points for their team.

No team may attempt to answer a tossup more than once. No team may engage in spoken or written conferral during a tossup; violation of this rule is considered the same as a wrong answer.

A correct answer on a tossup earns a team 10 points and the right to answer a bonus.

At many tournaments, if a player buzzes in early enough in the question, a correct answer earns extra points; this is called a “power”. Powers can earn a team 15 points or 20 points depending on the rules in use.

Under many formats, a player who buzzes in before the end of the question and gives an incorrect answer loses 5 points for their team. This is called a “neg” or “interrupt”. No penalty is given if the question was completely read. PACE does not have a penalty for interrupting.

When a tossup has been read in its entirety, a player has 5 seconds to signal. Once a player buzzes in, they have 5 seconds to begin their answer. At some tournaments, these time limits may be shorter. In particular, NAQT rules are 3 seconds to buzz in and 2 seconds to answer after buzzing in.

Generally, you do not need to wait until your name is called to answer (some local formats do still require you to wait to be recognized).

If both teams have answered a tossup incorrectly, or time expires without either team buzzing in, the tossup is “dead”. The moderator will give the answer and move on to the next tossup without reading a bonus.

A bonus is awarded to a team that correctly answers a tossup.

Teammates are allowed (and encouraged) to discuss their answers on bonuses.

Bonuses are always worth a total of 30 points, almost always three parts worth 10 points each.

Answers should be given by the team captain; however they may designate a teammate to give an answer if they choose.

Generally, a team has 5 seconds to confer and give an answer on each bonus part. After four seconds, the moderator will ask, “Captain, your answer?” or words to that effect. At that point, the captain has one second to begin an answer or designate a teammate who will answer; in the latter case, the teammate must answer immediately. At many tournaments, moderators will take an answer clearly directed at them, whether or not it comes from the captain.

In some formats, particularly PACE, bonuses rebound, or “bounce back”: if one team gets a bonus part wrong, the other may attempt to answer it for the same number of points. The opposing team has 2 seconds to confer and answer on a bounceback.

Substitutions may be made at halftime, before overtime, or between games. Many tournaments also allow one timeout per game, which may be used to make substitutions.

Generally, teams may freely ask for a score check between questions. Since there is a running clock at NAQT nationals, you must call a timeout to check the score. Teams are encouraged to keep a running score themselves (via players, alternates, or coaches) and bring up any errors (someone may have made an addition error!)

Protests must be lodged before the team leaves the room after the game.

Usually, protests will be resolved only if they affect the winner of the game.

Consult a tournament’s official rules for more details on what is and is not protestable. Questions on the accuracy of the score (re: arithmetic) are not considered protests.

There are a variety of rules for what to do if a game is tied after tossup 20 or when the second half ends.

During sudden death, only tossups are read. The game ends with the first change in score, so a correct answer wins the game. In most formats, a neg loses the game. Since there is no penalty for a wrong answer in PACE format, the game can only end with a correct answer.

Some tournaments dispense with overtime entirely; a game tied after the second half remains a tie.

General Rules for Answers and Prompting:

For most people, a last name is sufficient. Where that results in ambiguity (e.g. John F. Kennedy vs. Robert F. Kennedy vs. Ted Kennedy), a first name or initial will be required.

If an answer is partially right, but not specific enough (such as “Kennedy” or answering “Bill of Rights” when the required answer is “the First Amendment”), the moderator will say “Prompt” or “I need more”. The player then has a few seconds (how many depends on the tournament) to provide the more specific information.

Most quizbowl is played at weekend tournaments. Over the course of a tournament, a team will play several games. Frequently teams will play a round-robin schedule, where they play every other team in a group.

At almost all tournaments, a school is permitted to bring more than one team, however a single player may never play for two different teams in the same event.