The 2015 NSC was held at the Hyatt Regency in Reston, VA on June 6 and 7. Detroit Catholic Central High School from Novi, Michigan (Joshua Cantie, Austin Foos, Conner Reynolds, Jack Watts) unseated the 2014 NSC champions, Liberal Arts and Sciences Academy from Austin, Texas (Alex Denko, Forrest Hammel, Ethan Russo, Corin Wagen), by winning the first game of their advantaged final 470-370. This is the first NSC title for DCC, the only school with the distinction of having attended every NSC ever held since the NSC’s founding in 1998. 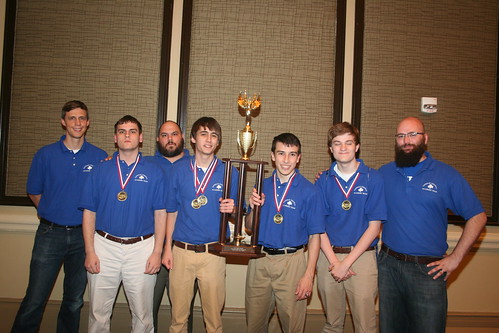 The tournament’s leading scorer was Bruce Lou of Saratoga, who scored 153 points per game in leading his team to a 27th place finish. Jostling right behind Bruce were Henry Hawthorn from Harmony, who finished in 18th place while playing solo, and Eric Xu of Western Albemarle, who was also the leading scorer on the third place team.

An All-Star game was played between “DJ Khaled”, comprised of Eric Xu, Jack Watts, Bruce Lou, and Rohan Kodialam, and “Siren”, comprised of Sam Blizzard, Henry Hawthorn, Corin Wagen, and Connor Wood. The DJ Khaled team, who were playing for the World Wildlife Fund, defeated Siren, who were playing for UNESCO. PACE made a donation of $400 to the WWF and $100 to UNESCO.

On par with the 2014 NSC, this was one of the largest ever NSCs, featuring 96 teams from 79 schools in 3 countries.

The question set, full statistics, and audio recordings of select games including the final are available.

The photos taken by Colin McNamara during the tournament and awards can be found online, and teams are welcome to use their photos for any purposes they wish.

The 2015 Benjamin Cooper Award was presented to Joshua Rutsky, coach of Hoover High School, for his leadership in promoting high quality quizbowl in Alabama.

The 2015 Young Ambassador Cooper Award was presented to Nicholas Karas for his extraordinary outreach work in California.

This is the first NSC title for DCC, the only school with the distinction of having attended every NSC ever held since its founding in 1998. DCC B was also the highest-finishing B team, finishing at the top of their playoff bracket for 17th place.

The highest-finishing team competing at NSC for the first time was Arcadia High School from Arcadia, CA, finishing at the top of their playoff bracket for 9th place.

Thank you for joining us in Reston, and we hope to see you in Chicago next year for the 2016 NSC!