Here are ten ways that a tournament director can improve the logistics of a quizbowl tournament. This isn’t meant as a full guide for hosting a tournament, but you may find these individual tips helpful. 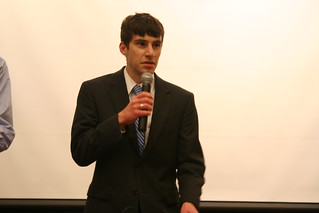 Photo by Colin McNamara.
1. Send out snail mail invitations to your tournament – While this takes some time and costs money for printing and postage, you’ll almost always attract a few teams with this method that you wouldn’t be able to attract through other forms of communication. If you don’t already have a list of contacts, ask other quizbowl teams in your area if they have a list. If there are any quizbowl leagues or regional/state competitions in related fields like Science Bowl or Knowledge Bowl, try finding contact information from these programs. When you don’t have specific contact information for a school, send unsolicited mail to “Academic Competition Coach” to local high schools.
2. Tips for using electronic questions – When reading questions off of laptops, it’s a good idea to password protect the packets to prevent a moderator from reading the wrong round. The most compatible way to do this is to use the Protect Document option in Microsoft Word and add a password to the document. Use a very simple password for each document and write down the passwords in a separate file or on a piece of paper. Generate a zip file of the password protected documents and send them out to moderators the night before the the tournament to reduce the time spent in the morning putting questions on laptops. Keep a copy of the unprotected files on your computer in case something goes wrong. It’s also a good idea to write the round number and password for each round on scoresheets that you give out each round.

a. Also, make sure you have several backup laptops and thumb drives.

4. Track which rooms buzzers go to – This will allow you to easily reconnect teams with their buzzers at the end of a tournament. Furthermore, it’s a good idea to assign buzzers in rooms that will be used for the top bracket in the playoffs to buzzers owned by the team running the tournament or the teams likely to be in the top bracket.

a. Printing contingency schedules in case there are a few extra teams or a few fewer teams than expected is also a good idea.

6. Select control rooms based on proximity to game rooms – You can save a few minutes from each round if you locate your control rooms (i.e. the room where staffers return scoresheets and get packets/scoresheets for the next round) in a central location to reduce the walking that staffers need to do. Similarly, when making schedules (especially those with brackets), try to arrange it so that teams have a minimal amount of walking to do between matches.

a. When reserving rooms, try to get all of the rooms needed for the tournament in the same building and ideally on the same floor.

7. Make frequent backups when using SQBS – SQBS, one of the most common tools for entering stats, does not save backup files on its own. To be safe, you should save stats after each round with distinctive file names to minimize the damage that you’ll lose in the event of a program or computer crash.

a. Remember that SQBS only runs on Windows, so make sure you have a PC capable of running the program prior to the day of the tournament.

8. Mark scoresheets after entering them into a computer – Once you finish processing the data from a scoresheet, put a small checkmark on the top of the sheet so that you know you’ve processed it. The reason for doing this is that if you find yourself missing one or more matches, you can easily go through the stack of processed scoresheets to confirm you didn’t accidentally skip over one.

9. Bring a printer – At the very least, a printer is useful for printing out team and individual stats. Printers can also be life savers for tournaments in the event that you need to print out a new schedule or updated versions of questions during the tournament itself.

10. Selecting book prizes – Many tournaments give players from the top teams and the top individual scorers prizes in the form of used books. If you are going this route for your tournament, the common practice is to select books that come up in the quizbowl canon. Ideally, these should also be books that a player has not likely encountered in the classroom before. A great place to find books like this are in used book stores, library book sales, or thrift stores. Often works of classic literature and history can be found for under a dollar or two at these locations. Try to select a variety of subjects and genres to offer a wide selection to players. Most tournaments usually give book prizes to everyone on the top team and the top 8-10 individual scorers, although this may vary based on the size of your field.

a. Also, it’s never a bad idea to offer actual trophies to the top teams at your tournament. Trophies are valuable tools in attracting administrative support for quizbowl teams.